We’re the only Manchester city centre restaurant awarded a Michelin Bib Gourmand in 2021 and to receive the accolade for 5 consecutive years.

El Gato Negro has been voted ‘Best Restaurant’ at City Life’s 2019 Awards at the Deaf Institute, an annual event with the cream of Manchester’s entertainment scene

Awarded Manchester city centre’s only Bib Gourmand in the 2019 edition of the prestigious Michelin Guide, we’re delighted to have secured a hat-trick

The twentieth Manchester Food and Drink Festival has come to a close, and it’s been another couple of weeks of celebration and success for all involved, and a chance to reflect on just how incredible the food and drink culture is in Manchester in 2017.

El Gato Negro has been involved all the way through this year’s MFDF; firstly as Simon featured as one of their 20 Gastro Icons; then by hosting a successful pop-up evening on the first weekend at Festival Hub.

Finally, as this milestone festival ended with the one of the highlights of the industry calendar, our team had an excellent and excitable time amongst industry colleagues at the prestigious Manchester Food and Drink Festival Awards at the The Principal Hotel.

We were overjoyed to be announced as winners of the ‘Premium & Fine Dining Restaurant of the Year’ category. El Gato Negro had been nominated alongside some of Manchester’s best and most exciting establishments and so we were incredibly honoured to have been selected as this year’s winner, especially after we won the ‘Best Newcomer’ category in 2016.

Many thanks to everyone who supported and voted for us this year, and to our incredible colleagues… we couldn’t have done it without you!

We’re over the moon to have been awarded a prestigious Bib Gourmand for the second year running in the 2018 edition of the Michelin Guide. After gaining a Bib in our first year of operation, retaining this accolade is a real honour. As the only Bib Gourmand holder in Manchester, we’re very proud of the recognition El Gato Negro has gained in offering exceptionally good food at moderate prices.

“We’re absolutely blown away to have been awarded a Michelin Bib Gourmand for the second year running in Manchester. It’s an incredible team effort and a fantastic achievement for all, we’re looking forward to raising a glass together to celebrate.”

This is the latest in a string of achievements for El Gato Negro, which this year was recognised as one of only two Manchester establishments in the National Restaurant Awards 2017 as well as featuring in the Waitrose Good Food Guide 2018.

We would like to thank all our staff and suppliers, as well as our loyal customers and friends in the industry for all the support and hard work… without you we wouldn’t be celebrating this recognition today. Congratulations to all the establishments who have also retained or gained awards and accolades in today’s Michelin Guide announcement: we’re honoured to be in such august company.

Yesterday Simon and the team headed to London to join the great and good for the 2017 Estrella Damm National Restaurant Awards at the Hurlington Club in London.

After the surprise and honour of our debut placement last year at 81 the team celebrated an even higher ranking of 78th in the UK on this year’s prestigious industry list, one of just two Manchester restaurants.*

“It’s been quite a journey over the past year and the success we’ve enjoyed so far has been nothing short of phenomenal. As a restaurateur, you have to gain a trust with your customers and I’m continuously blown away by the demand to dine here.

“Now the challenge is to keep the menu fresh and the specials exciting.  We have no plans to sit back on our laurels thinking we’ve made it. This is just the start of an amazing journey.”

Being recognised in the tenth year of this extraordinary list of the nation’s best – as voted by 180 industry experts from across the UK, including chefs, restaurateurs, food writers, critics and other experts – is an incredible honour. Thanks to everyone who helped us to reach this position, whether it’s our colleagues, suppliers, supporters or customers.

You can view the full awards list here on Big Hospitality.

* Congratulations to Gary and everyone at Hispi in Didsbury for their debut at #54 on the list!

Last night we were thrilled to be revealed as the winners of CityLife Awards 2016’s ‘Best Restaurant‘ category at a ceremony at Crazy Pedro’s in Manchester.

El Gato Negro was shortlisted alongside some of Manchester’s brightest and best restaurants so we’re honoured to have been voted as the city’s best, winning with more than a third of the public vote.

In a city with as dynamic and exciting a food culture as Manchester it’s a particular honour to be awarded ‘Best Restaurant’, and at the awards ceremony last night – surrounded by friends old and new – we were reminded how talented and welcoming everyone has been since we opened in February 2016.

Wow, what a buzz! We’ve been open less than a year but the Manchester public have really embraced us and been so receptive of our vision and offering. This sets us up for a very exciting 2017, coming as it does just a few weeks before our first anniversary, and we have plenty of exciting plans for this year. Thanks for all the support and loyalty from our customers.

Coming on the heels of a run of accolades in 2016 – gaining a Michelin Guide Bib Gourmand, Newcomer of the Year at the MFDF awards, Lancashire Life’s ‘City Restaurant of the Year‘,  and debuting in Restaurant Magazine’s National Restaurant Awards Top 100 has been a remarkable and inspiring experience.

A huge thank you to our incredible staff, suppliers and supporters… we really couldn’t have done this without you. We are so proud of the team here at El Gato Negro. As for our customers, thanks so much for helping us to make us feel so at home in the heart of Manchester in our first year. We look forward to serving you to the very best of our ability in the future. 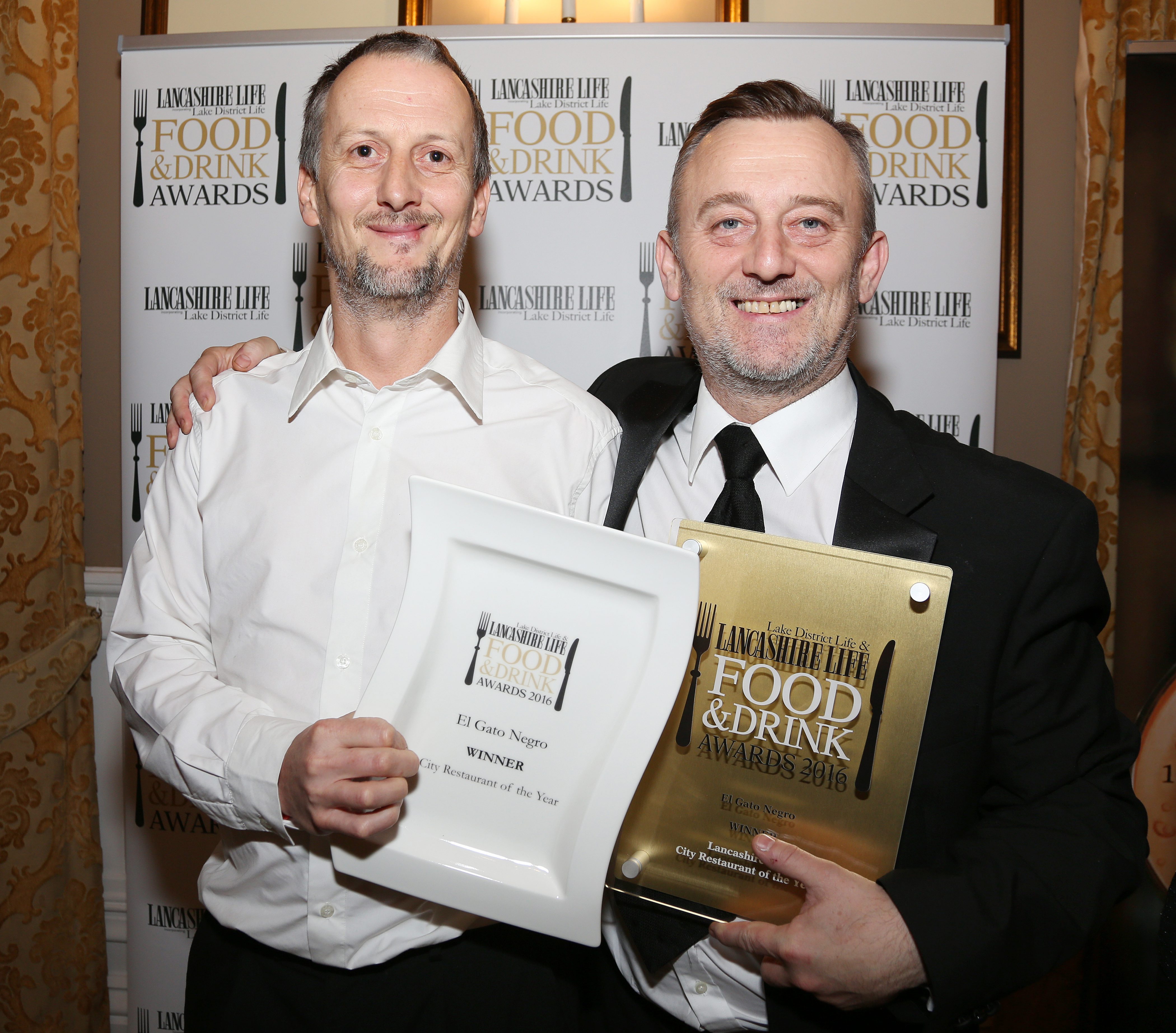 Smiles all round as the team tonight celebrates a win at this year’s prestigious Manchester Food and Drink Festival Awards, held in the spectacular settings of The Palace Hotel‘s Ballroom.

After enjoying a great Gala Dinner the gathered crowd of hospitality professionals – including our El Gato Negro contingent – settled down to enjoy this year’s awards ceremony, hosted by BBC Radio Manchester’s Becky Want and XS Manchester’s Matt White. The atmosphere was electric and the anticipation grew steadily as the winners of seventeen awards were announced. Our team was over the moon to be included amongst Manchester’s finest, collecting the Newcomer of the Year from the incomparable John Thomson.

“This whirlwind year certainly shows no sign of slowing down and to receive the Newcomer of the Year award was really just the cherry on top. It’s a fantastic achievement having only been open a short space of time.

“It’s incredible for me and for everyone who has worked so hard. We’ve opened with a bang for sure, but there is still a lot of hard work to do. As a restaurateur, you have to gain trust. If a customer trusts you in your knowledge, production, presentation and the ambience you set – that’s why they come back. We are seeing regular customers in a period of nine months, which is amazing.”

Coming just a week after we were awarded a Michelin Guide Bib Gourmand, and in the same year we debuted in Restaurant Magazine’s National Restaurant Awards Top 100, 2016 has exceeded all our expectations.

This award has a particularly personal resonance, knowing it’s voted for by members of the public as well our colleagues in the hospitality industry across Greater Manchester. We continue to be overwhelmed by the level of support, goodwill and enthusiasm we’ve received since we opened in our new home city, and we hope we’ll be able to reward such friendliness and loyalty as we continue to develop and refine our offering over the next few months.

More than ever, we’re indebted to our incredibly talented, hardworking and brilliant colleagues – who truly make El Gato Negro Manchester what it is – and our customers, without whom we would not exist. Thank you all.